There was an error retrieving images from Instagram. An attempt will be remade in a few minutes.

Every so often when I’m attending a festival, some dude sees my media pass and presses a free CD into my hands. Since these people obviously want a review, (and since I usually have a long drive home) they’re gonna get what they asked for. No bullshit, no sugarcoating, no punches pulled.

Round One:
At Times of Madness
S/T
Self-Released
Canada
2009

Spazzy songwriting. Whiney ex-boyfriend clean singing/talking. Fred Durst apologetics. We listened to this CD on the way home from Armstrong Metalfest and my buddy Mike looked at the tracklist and asked incredulously but I’ll say diplomatically, “they made eleven of these?” This album is pretty edgy; I’m glad the band had the presence of mind to slap a Parental Advisory logo on the cover. Vocalist Josh Pym sounds like he’s got serious issues on his mind. Either that, or his V-neck is too tight. The band thanks “God” but I’m pretty sure that if there was a god, he would have smote these kids with a hail of Manowar records before they ever hit the studio. Real talk: Everything about this release is fucking atrocious. The only mitigating factor would be the inclusion of titties on the inside cover, so at least I had something to jerk off to while I was listening to this garbage. 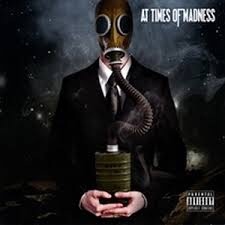 I’ve heard so many horror stories about this and I simply can’t keep quiet about it any more.

Envision a situation: Your band has been hard at work for the past 10 months in your buddy’s basement studio, chipping away at a full length record in your spare time between work, family, commitments and of course other band related stuff like gigging and touring. Now, the fruits of your labour are ready to be unveiled. You book your CD release party at a popular club two months from today. Great! All you have to do now is get the mixing, mastering, artwork, layout, pressing, artwork for line up merchandise to match and print T-shirts, stickers, patches, hoodies and posters and of course all the press and promotion lined up. Oh yeah, you should sneak a photo shoot in there while you’re at it.

Something’s wrong. Let’s break this down a bit here.

If you don’t see the severe error of this situation, you are fucked.

Your fuckedness is written in the stars, bro.

If your band has fucked around spending the better part of A YEAR recording your album, what makes you think you’re in any shape to slap a sudden 2 month deadline on the remaining EIGHT STEPS (if not more) and get away scott-free? And why do we want to get away “Scott-free” anyways? Scott’s fucking awesome. But I digress.

BOOK YOUR CD RELEASE PARTY WHEN THE DISKS ARE IN YOUR HANDS.

Think about all the things that could go wrong in this process:
– Mixing guy’s studio burns down
– Artwork gets lost in the mail
– Layout designer goes on vacation right when you need crucial changes made
– Pressing companies booked SOLID
– CDs shipped to the wrong address
– Shirts printed with missing colours
– People in the press/media can’t get their interview schedules to match with yours
– Drummer too lazy to write thank-you list
– Mastering engineer has a mental breakdown and is impossible to reach for 3 weeks
– Photographer’s camera is seized for evidence in drug bust
– ZOMBIE APOCALYPSE
– Pet orangutang eats your hard drive before you can e-mail files to the pressing plant (why the fuck did you buy an orangutang anyway?)

These are just a handful of examples. You thought organizing a 5-piece band was tough? You ain’t seen nothing yet. Most albums and physical releases go through the hands of like TEN other people before they see the light of day.

When you’re dealing with this many people, shit goes awry. Life happens.

I’ve talked to at least three different bands in my city about pressing woes this year. Something happens down the pipeline (usually in the artwork/layout phase) and now they’ve got two weeks to get the CD in their hands, or they’re playing a CD release gig without the goddamned CDs. This means you’ll have to pay OUT THE ASS to get your disks ready on a rush schedule.

I realize that this sounds harsh, but it’s the truth. If your band takes that long to record an album, then you’re not ready to put the timer on like that. You’re not serious enough yet. I get it, you’re a serious musician. But you’ve got kids to feed, a wife/husband to please, a car to get fixed, beers to drink and a World Cup to watch… life’s tough, right?

I hate to break it to you, but being in a proper, professional band means making sacrifices, difficult choices and looking at your priorities. If you want to record your album, then fucking record your album. Save up money. Fundraise. Book a decent studio and use some vacation time (if you’re fortunate enough to be in a situation where you GET vacation time) to lay down your parts. Oh yeah, let’s not forget REHEARSING so you can go in, track your shit in a timely fashion and get out.

If you go through two birthdays to record your album, then you aren’t all that serious. Sure, you take your music seriously and your art seriously, but you don’t take the vehicle off being in a band seriously. It’s just a hobby.

There’s nothing wrong with that.

But just accept it, and stop fucking yourself over with stupid decisions, okay?

Let me leave you with some tips on how to avoid these nightmare situations. They should be fucking obvious, but clearly they’re not.

– Book your CD release show WHEN THE CDs ARE IN YOUR HANDS. You waited a year (or longer) to finish recording, what’s another one or two months for the gig? More time to rehearse!

– Take care of artwork, layout, merchandising and as much of that other shit as you can while the recording is taking place. Streamline. Most of this other is simply a matter of sending e-mails and brainstorming ideas. It’s not hard.

– Have (reliable) band members who can do shit for the band. IE, your bassist has a degree in fine art. Maybe she can direct the art for your release while everyone else is recording their parts. Your singer is a photoshop whiz, let him put together the layout. Your drummer works for a screen printing shop. Whatever.

– Stick to your god damned plan

My coverage of Farmageddon festival from June 2014.

THURSDAY
The pre-party was a speed metal smackdown at Filthy McNasty’s on Whyte Ave featuring Riot City, Hazzerd, Powerslave and Vicious. No cover charge; the gig had a pretty healthy run of attendees throughout the night. Powerslave kicked off the proceedings with a tribute to Iron Maiden, with an eye on tunes from the self-titled album all the way through to Fear of the Dark. Decent background…

In northern Westeros, born and raised
The Wolfswood is where I spent most of my days
Chillin’ out with my father, executin’ runaway crows
Shooting arrows with my half-brother Jon Snow

END_OF_DOCUMENT_TOKEN_TO_BE_REPLACED 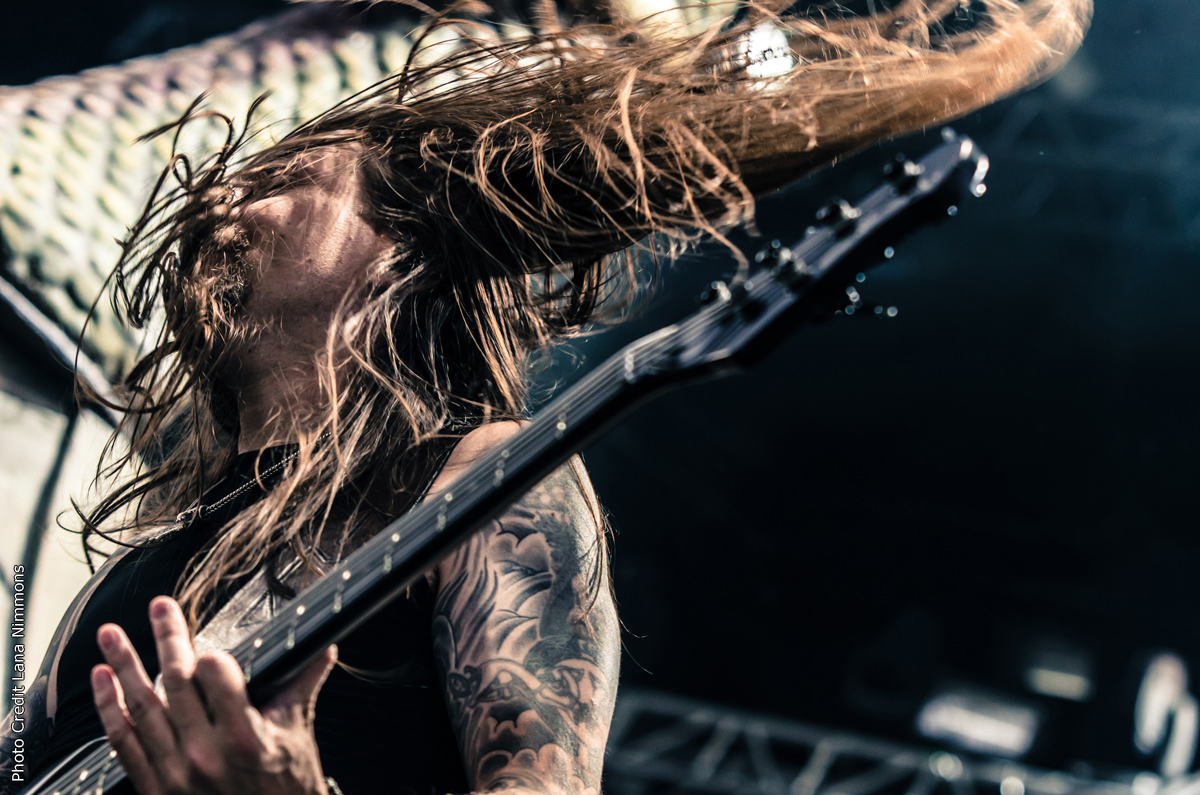 A little article I wrote on why your rock/metal band puts on crappy shows and some advice for fixing the problem. 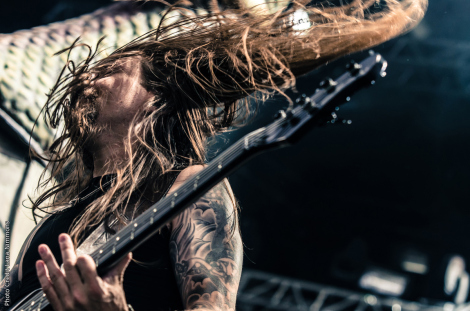 If your idea of playing a show involves tying back your hair, slipping into your favorite Cannibal Corpse tee and staring at your toes and fretboard for forty-five minutes, you’re doing it wrong. Said it, I meant it, now I’m here to represent it.

Every time I go to a local show, I find myself confronted by these types of bands. Lazy, uninspired non-performers who look like they’d rather be at home munching on Doritos and watching reruns of Friends than onstage, and it shows in their crowd attendance and overall response. If your show has me reaching into my pocket for my iPhone (or for a gun to put in my mouth) then we got a problem. No wonder turnouts for local gigs are at an all-time low and bands can’t make…

Sometimes the truth is stranger than fiction.

The Red Pen of Doom

Every day, there are real stories in the morning newspaper that make you snort coffee out your nose or choke on a blueberry muffin. Note: This is why journalists call such pieces “muffin chokers.”

Yet the daily weirdness is more than funny. If you dissect these stories, you can learn deep storytelling lessons from the shallow end of the journalism pool.

Here’s a real story that just happened in my state: Man steals RV from Wal-Mart parking lot, leads police on wild chase. Swerves into sleepy little town where he knocks cars into front yards and such, then blasts through a house and crashes. Runs out, strips down to his underwear and invades a home to steal girl clothes. Cops catch him and haul him off.

This is pretty typical of a weird news story, and not simply because it started in the parking lot of a Wal-Mart — and yeah…

My final student of the day, a lad of eight years abruptly stopped his rendition of “When the Saints Go Marching In.” He wrinkled his nose.
“Did you fart?” he asked.
“No,” I lied.
“I’m pretty sure you did,” he said, his expression grave, “Unless you just smell like dog crap all the time.”

Can’t get enough of these kids.

Penbanger
Create a free website or blog at WordPress.com.